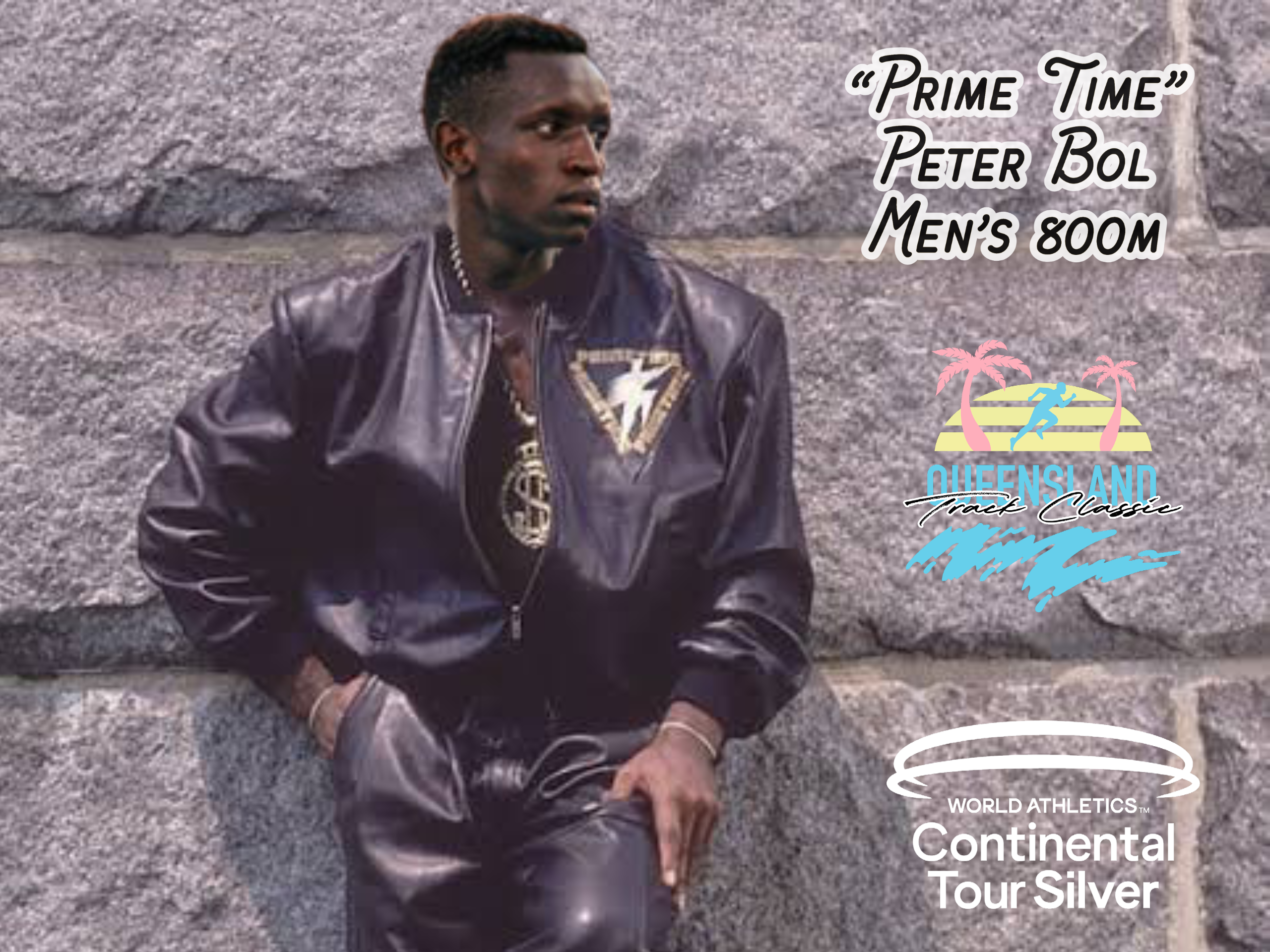 One of the hottest events right now in Australian Track and Field is the Men’s 800m and the Queensland Track Classic will host a star-studded line-up on the 27th of March. The field includes 8 of the 10 fastest athletes in Oceania for 2021. The two in the field that don’t currently feature in that 10 are the Australian record holder Joseph Deng and 1:46 man Mason Cohen.

Not only is the current depth mouth-watering, but the all-time depth is staggering, with four of the top eight fastest men in Australian history toeing the line.

The venue itself has a soft spot for 800m running, when 39 years ago at the 1982 Australian Championships, Peter Bourke stormed home to clock 1:44.78, the fastest time on Australian soil by an Australian soil.

Lately though, the event has been dominate by one man, Peter Bol. Three wins from three starts, including a 1:45.23 in Canberra put Bol head and shoulders above the rest. His Canberra run made Bol the third fastest Aussie on home soil and left him 0.03s off the Tokyo qualifying mark, but there’s a feeling they’ll be targeting something much fastest than just a qualifier.

Australian record holder Joseph Deng returns to his home state to race for the first time since the 2018 Commonwealth Games final after taking on pacing duties for stablemate Bol in Canberra and Sydney.

Youngster Jack Lunn will be looking to continue his meteoric rise in the 800m ranks, cutting his best by almost 8 seconds between 2019 and 2021. I’m not sure how many times and athlete can have a breakthrough race, but I feel like Lunn has already had multiple already and isn’t slowing down.

To purchase your tickets and check out the full entry lists, click here 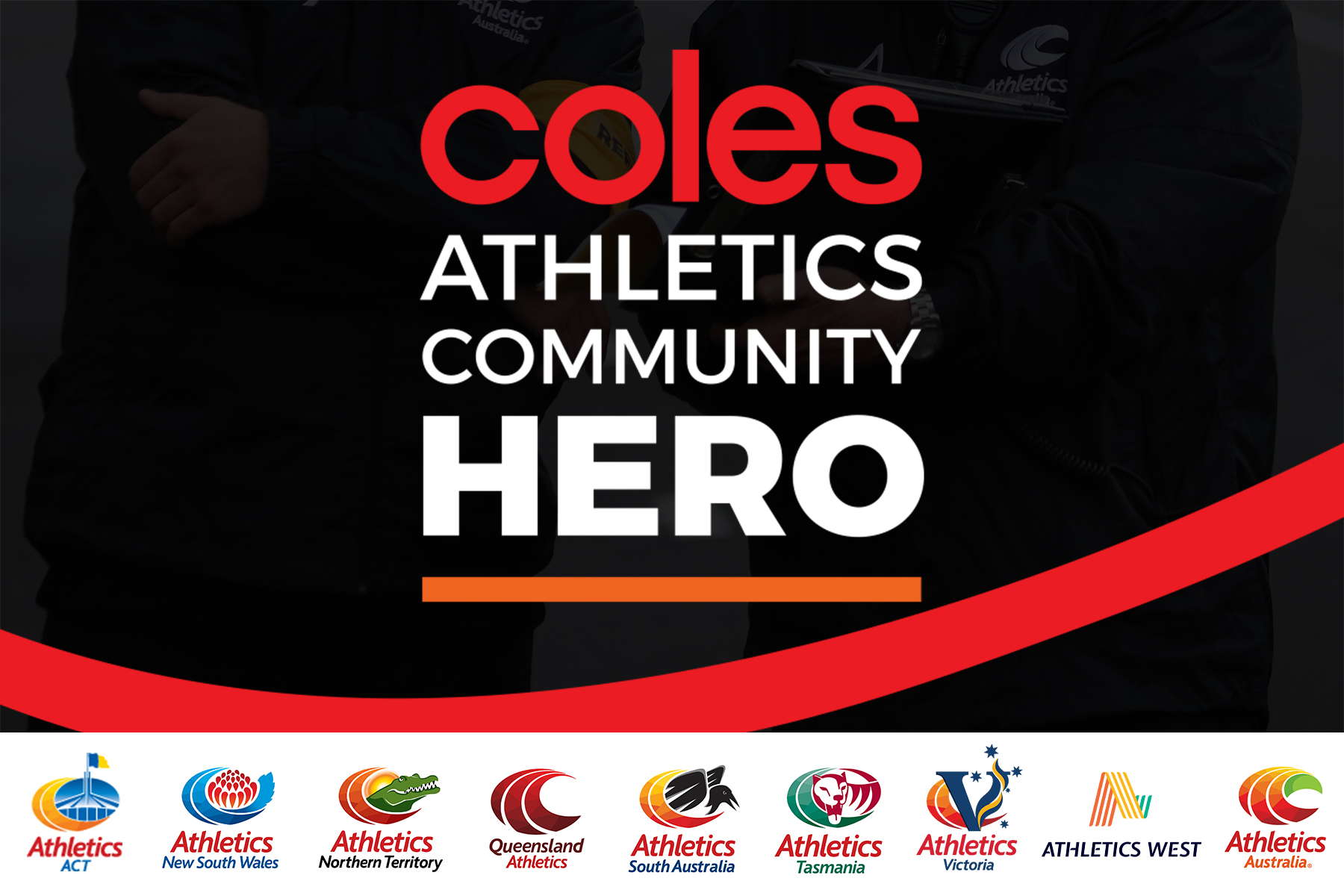 Athletics Australia is delighted to announce the launch of the Coles Athletics Community Hero Awards – an award designed in collaboration with Coles to bring the unsung heroes of our great sport into the spotlight.

The award provides a platform to celebrate those in the athletics community who often work tirelessly behind the scenes to ensure athletics in Australia is the success that it is.

Nominations are now open HERE and will be received on a state-based system, with a short list of five candidates per state produced before voting via social media will determine which member from each state will proceed to the national final as a ‘Local Coles Athletics Community Hero’.

The winner from each state will receive a $500 gift voucher along with a hamper courtesy of Coles, with the individual crowned the 2021 Coles Athletics Community Hero to accept $1,000 at Athletics Australia’s Awards night.

Coles' General Manager of Corporate Affairs Sally Fielke says "Coles is extremely proud to support the 2021 Coles Community Athletics Hero Awards. We’re excited to recognise and reward the unsung heroes in the athletics community who give so much time and energy to help Aussie athletes lead healthier, happier lives."

“It’s an exciting opportunity for us to bring all states and territories together and utilise their support to push the sport forward on a truly national level,” he said.

“Thanks to the support of our major partner Coles, we will be able to achieve our common goal of recognising the unsung heroes in the athletics community.”

Queensland Athletics CEO David Gynther encourages you to get behind the campaign by nominating those who have played an influential role in your athletics community.

Nominations are now open and close on April 4, with the short list of five candidates per state to be voted on between April 5-18. The Athletics Australia Special Awards Committee will then appoint a successful candidate and recognise them as the inaugural Coles Athletics Community Hero at the Athletics Australia Awards night to be held at the Australian Track and Field Championships. 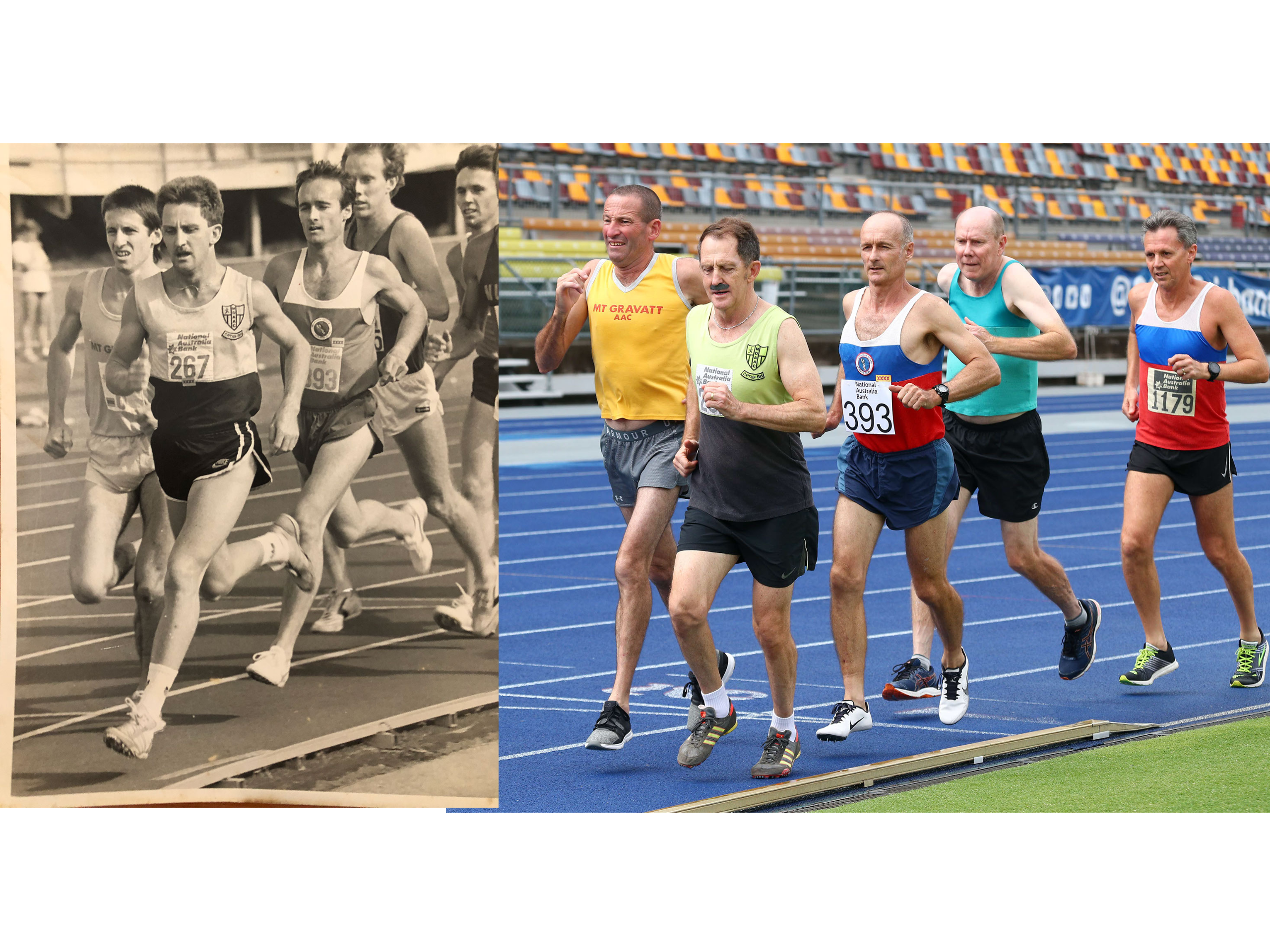 A run down memory lane

Age might have wearied them just a bit - although to be fair it was 35 years ago - but that didn't stop five former elite Queensland track runners getting back together to recreate a famous photo of the 1986 State 5000 metres title at QSAC on Sunday (Feb 14).

What started as a bit of good-natured social media banter in late 2019 between friends when the 1986 black and white photo was posted online, resulted in plans for the five runners - who all still live in Brisbane and have kept in contact - in reuniting for the photo, almost 35 years to the day.

Inwood and Eckersley went on to run for Australia while all five runners represented Queensland in track, road and cross country events in the 1980s and 90s.

Four of the five athletes have been lifelong runners with Mayor running two sub-2:50 marathons in 2018-19 and Eckersley running the Boston Marathon twice in 2016 and 2018. Hunter (a grandfather of six) still regularly does Parkrun.

All runners agreed that they were honoured and felt lucky to have run in such a golden era for Australian distance running, inspired by the international feats of Rob de Castella and Steve Moneghetti.

"Running was such a massive part of our formative years in our late teens and early 20s. We loved training hard and racing against each other and just trying to be better every week and seeing how far that would take us to national and international events," said Ian Eckersley.

"I think we all agree that athletics has been an important part of forming our characters and personalities throughout our lives. It was a lot of fun back then and continued to be fun for several decades after that as we kept running. And it was great for the five of us to get back together today to recreate the photo."

The five runners had to dig through old running attire to come up with original club singlets and some of them even managed to find their old racing spikes. Much to everyone's amusement, Eckersley even donned his moustachioed look from 1986 with a dodgy costume shop moustache that struggled to stay in place!!

There's now even talk of a 50 year reunion!! 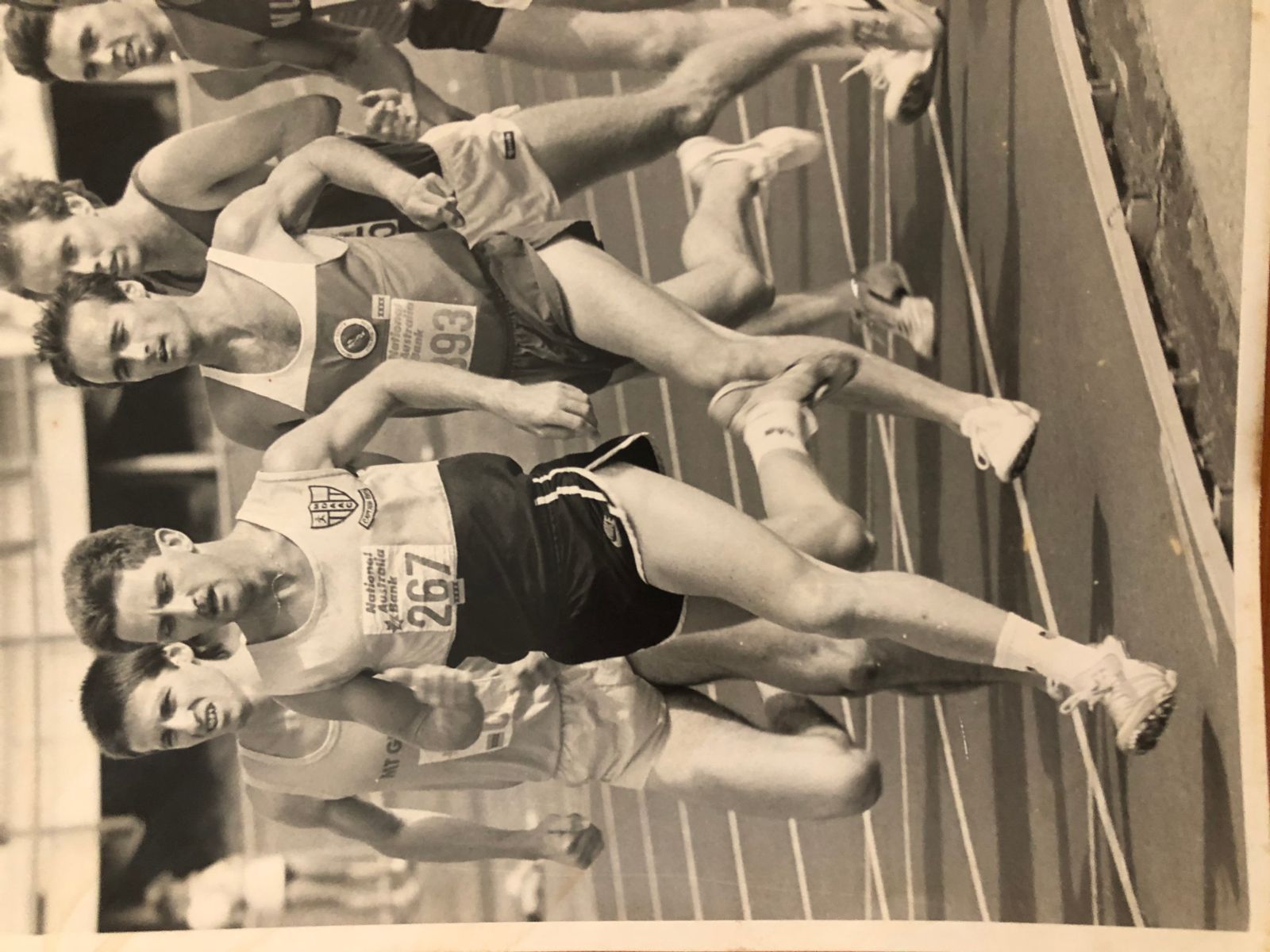 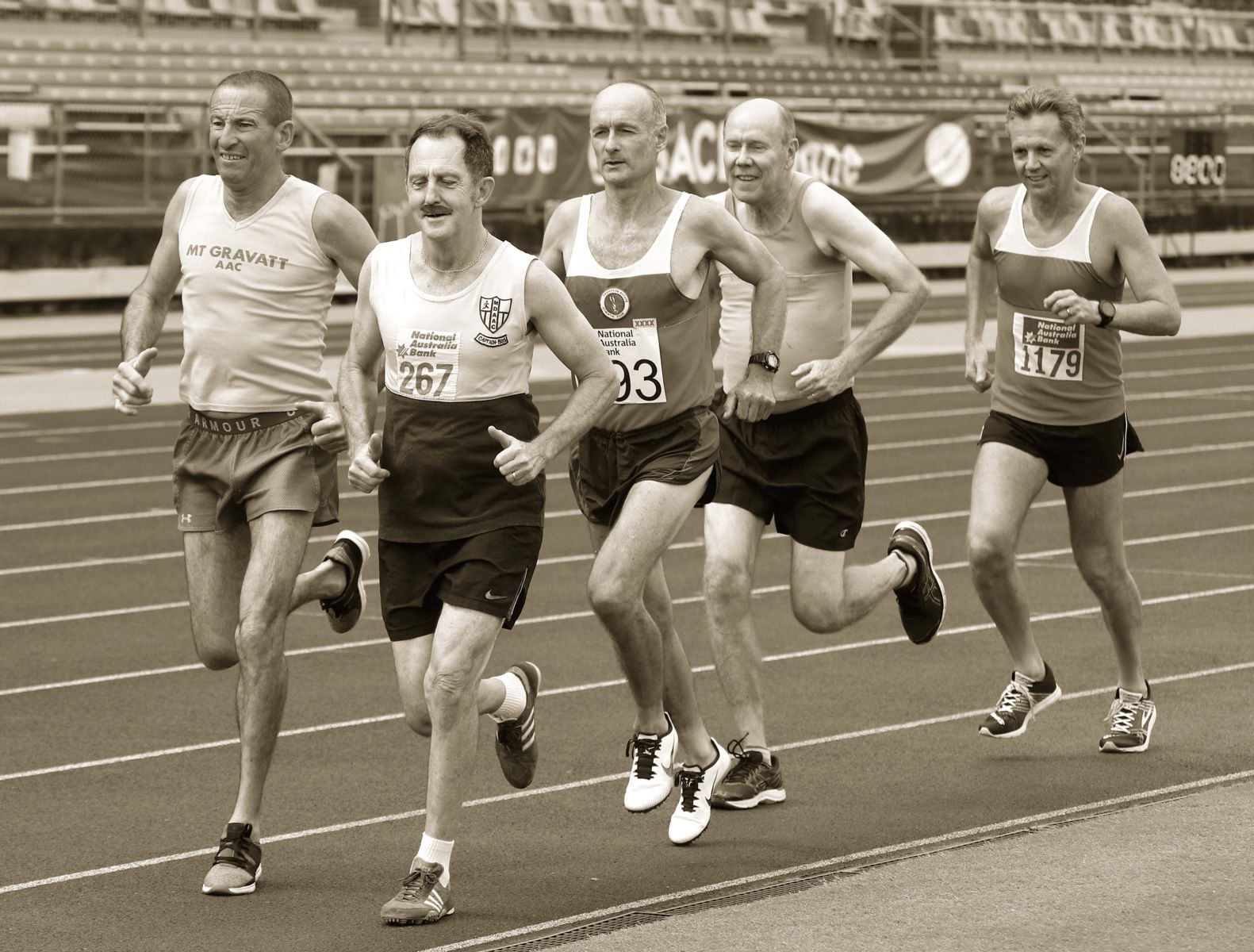 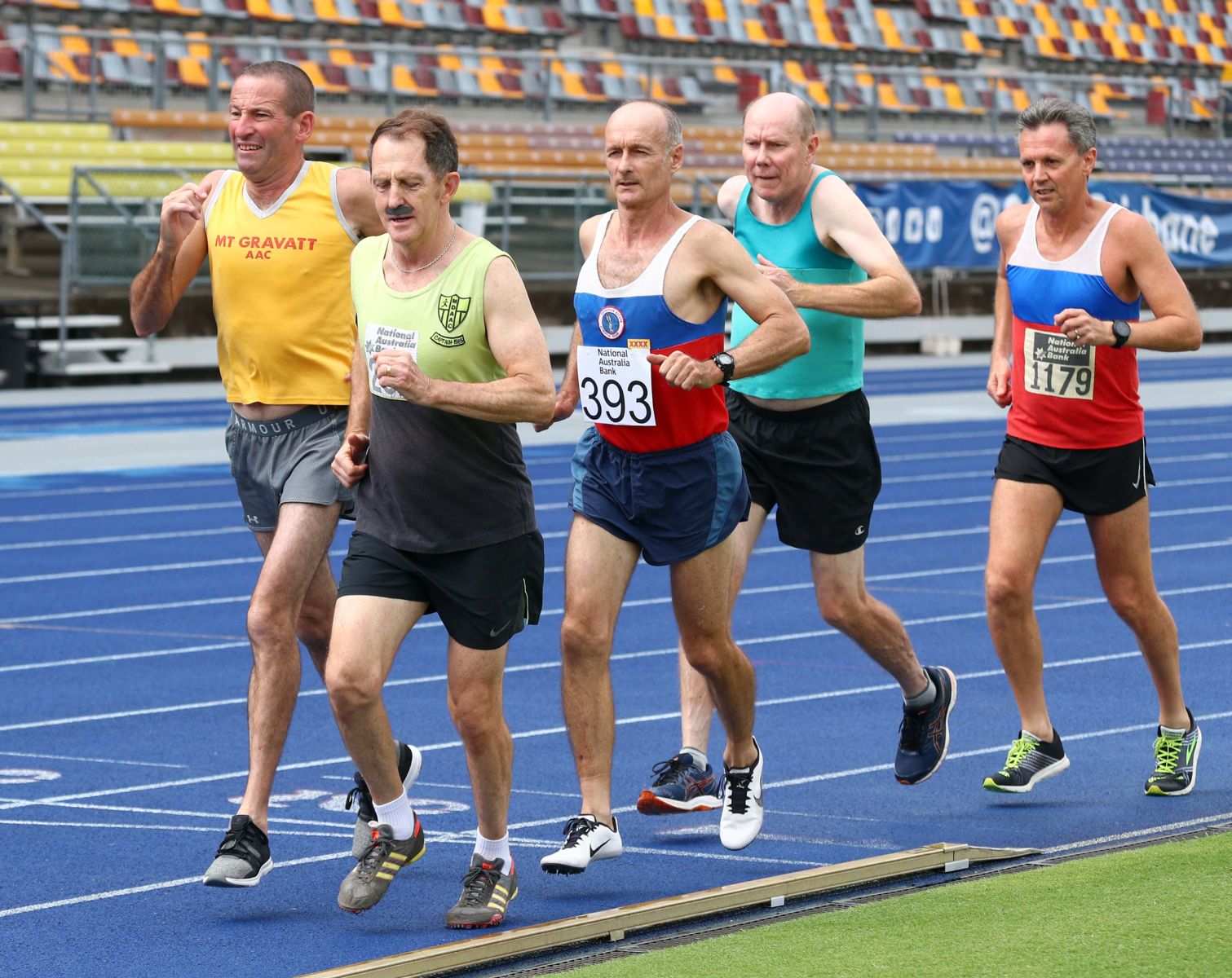 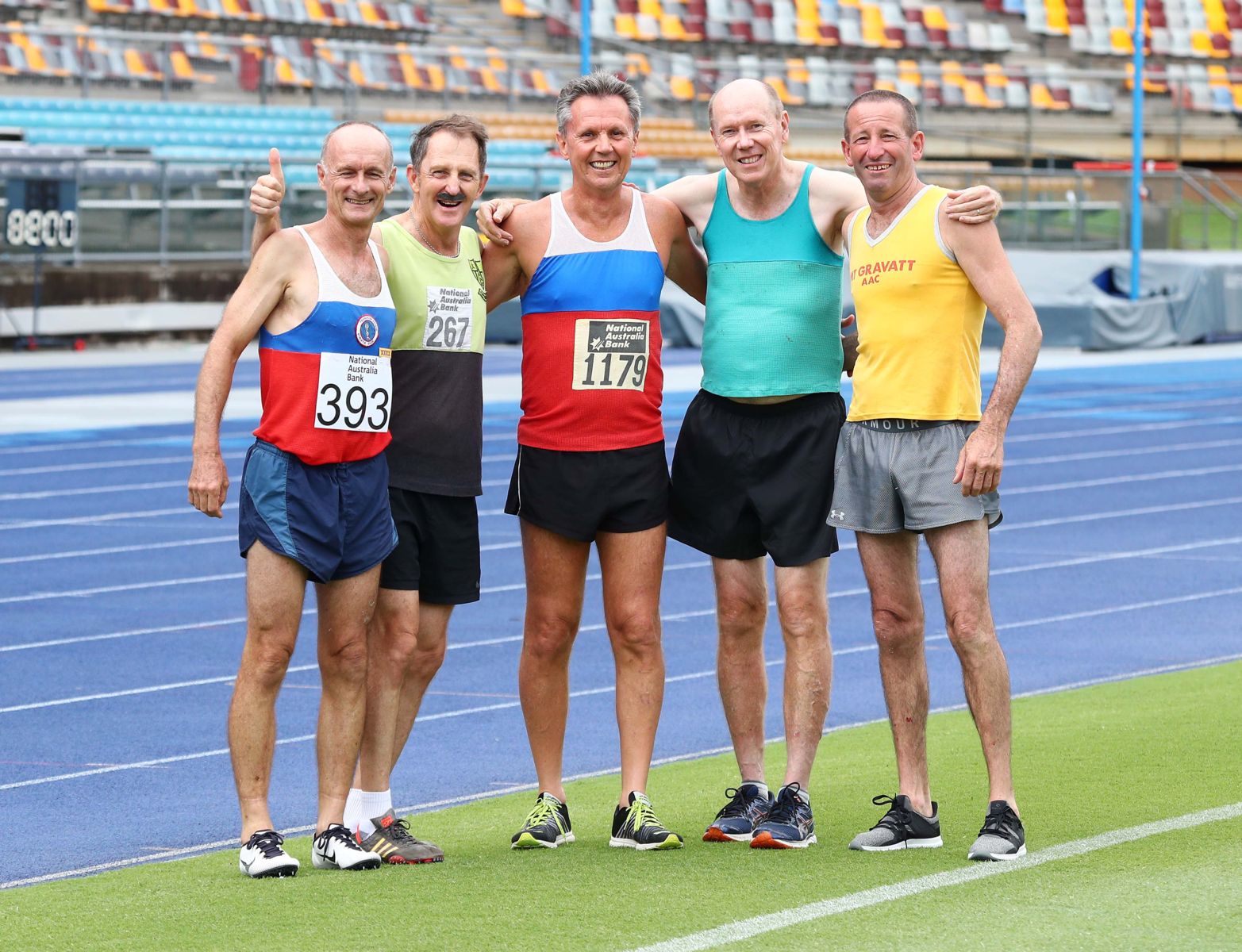 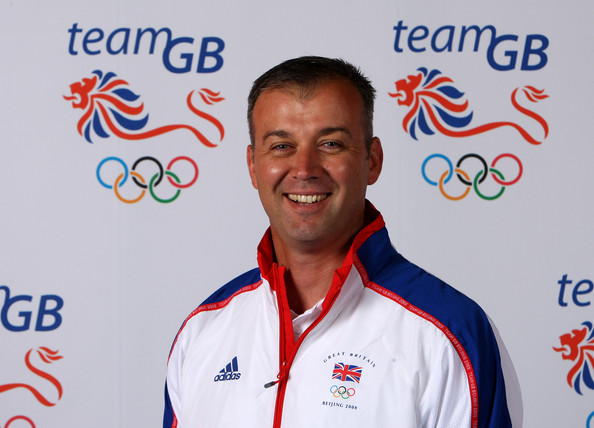 Queensland Athletics and the Queensland Academy of Sport (QAS) are pleased to announce experienced sports administrator and coach, Steve Rippon will step in the role of State Performance Advisor for Queensland’s high performance track and field athletes.

With a history of success as a high performance coach and sports administrator both in Australia and abroad, Rippon will re-join the Australian Athletics Community, after spending over two decades overseas, his most recent role being with Finnish Athletics as the National Event Coach for Pole Vault for nine years.

Prior to his stint in Finland, Rippon worked as the high performance Manager for UK Athletics at the number one sports university in Great Britain, Loughborough University. Before working in the UK, Steve was a high performance coach at the West Australian Institute of Sport.

AA’s General Manager of high performance Andrew Faichney said he was thrilled to welcome Rippon back to the Australian athletics community.

“Steve has such rich experience in our sport and has fostered talent from the junior level through to the Olympics, and we’re looking forward to him bringing his wealth of experience to bolster the success of Queensland’s NASS athletes both on and off the track and field,” he said.

“Steve’s experience both as a coach and managing coaches will also mean he is able to help further develop Queensland’s top coaches, which will no doubt help improve the trajectory of athletes rising up the ranks.

“As the lead High Performance Advisor in Queensland – a state that hosts one of our biggest cohorts of NASS athletes – we’re looking forward to him making a serious impact on the performance results of our athletes.”

Rippon commenced in his role on Monday, 3rd February. 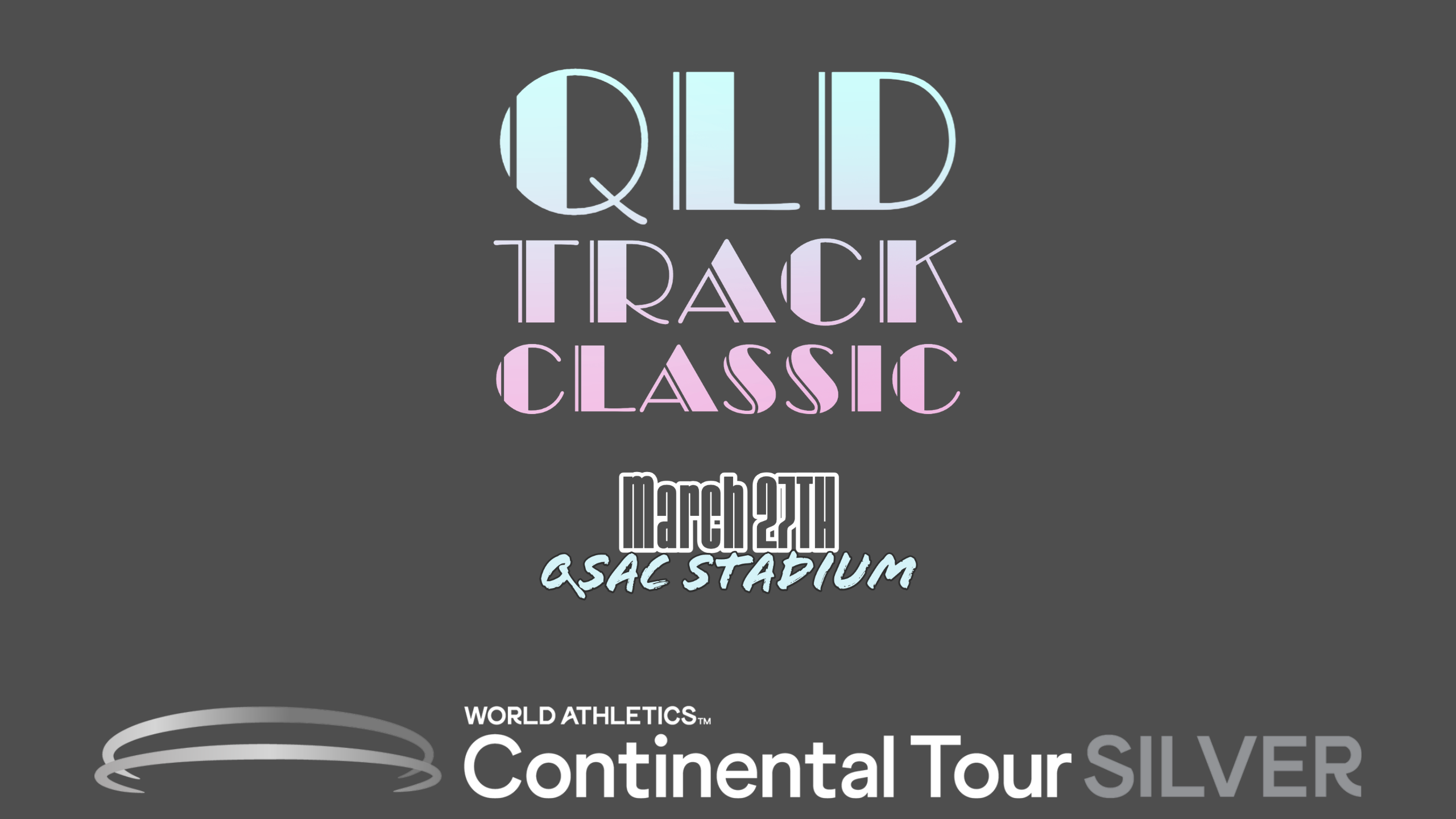 Notice in regard to 2021 Queensland Athletics State Championships and Queensland Track Classic.

We have taken some time to consider the best options for these events in 2021.

Taking into account the requirements of World Athletics and Oceania Athletics for the QTC, best outcomes for Queensland athletes of all ages and, modelling back up plans to deal with any increased restrictions due to COVID.

Were pleased to announce that the Queensland Athletics State Championships, U14 to Open will be held on the 11th to 14th March 2021.

The 2021 Queensland Track Classic will be a World Athletics Silver Permit Meet and will be held on the evening of Saturday the 27th March.

We will be adding a new Shield Meet to the Calendar, the Darren Thrupp Shield and this will be held as a pre meet to the Queensland Track Classic on the afternoon of the Saturday the 27th March.

With the Australian Athletics Championships starting on 12th of April we also see the opportunity to announce an additional competition on Wednesday that 31st March to assist athletes in preparations for Nationals. 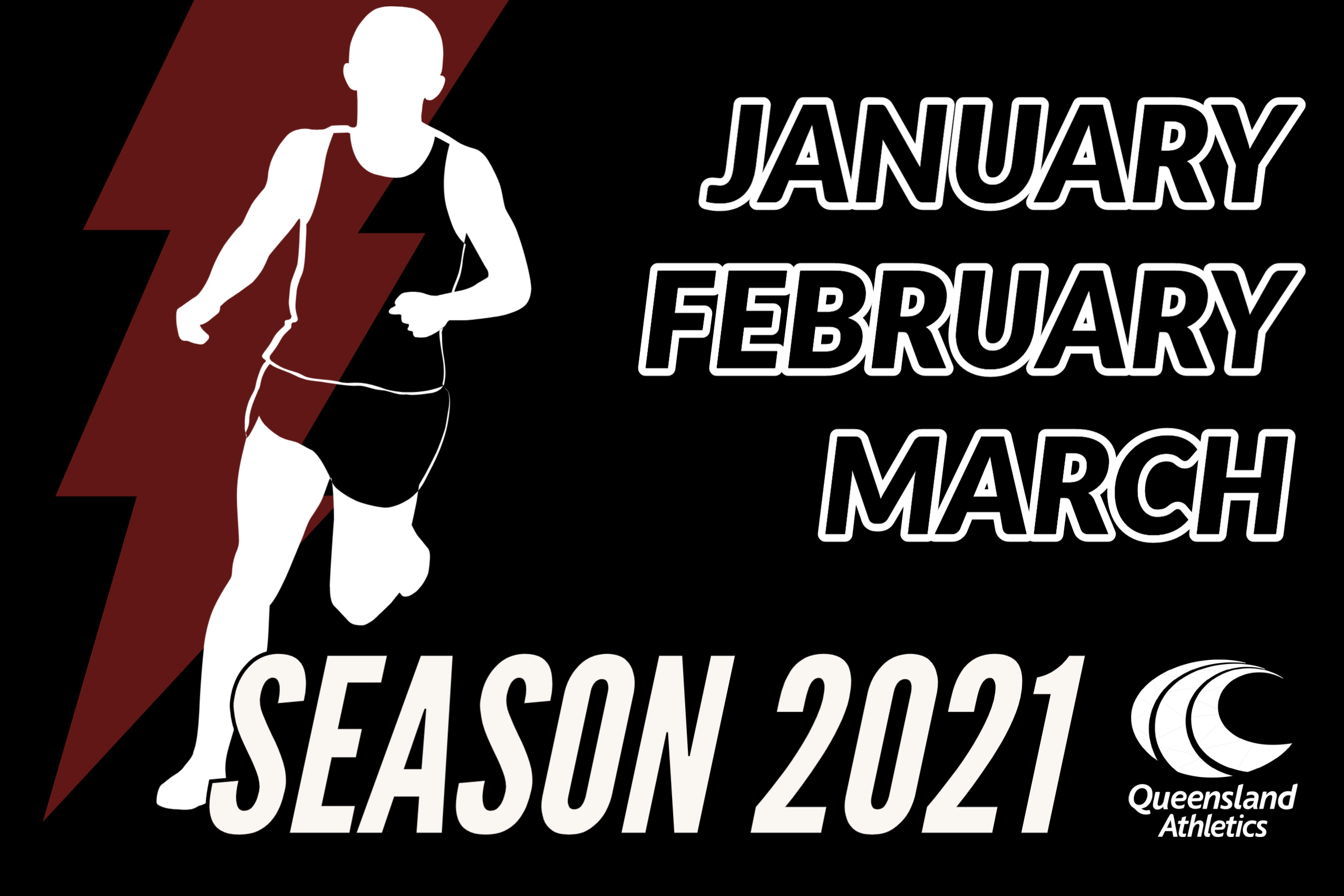 We're happy to announce the next block of dates for the beginning of 2021!

Event grid will be made available later this year. 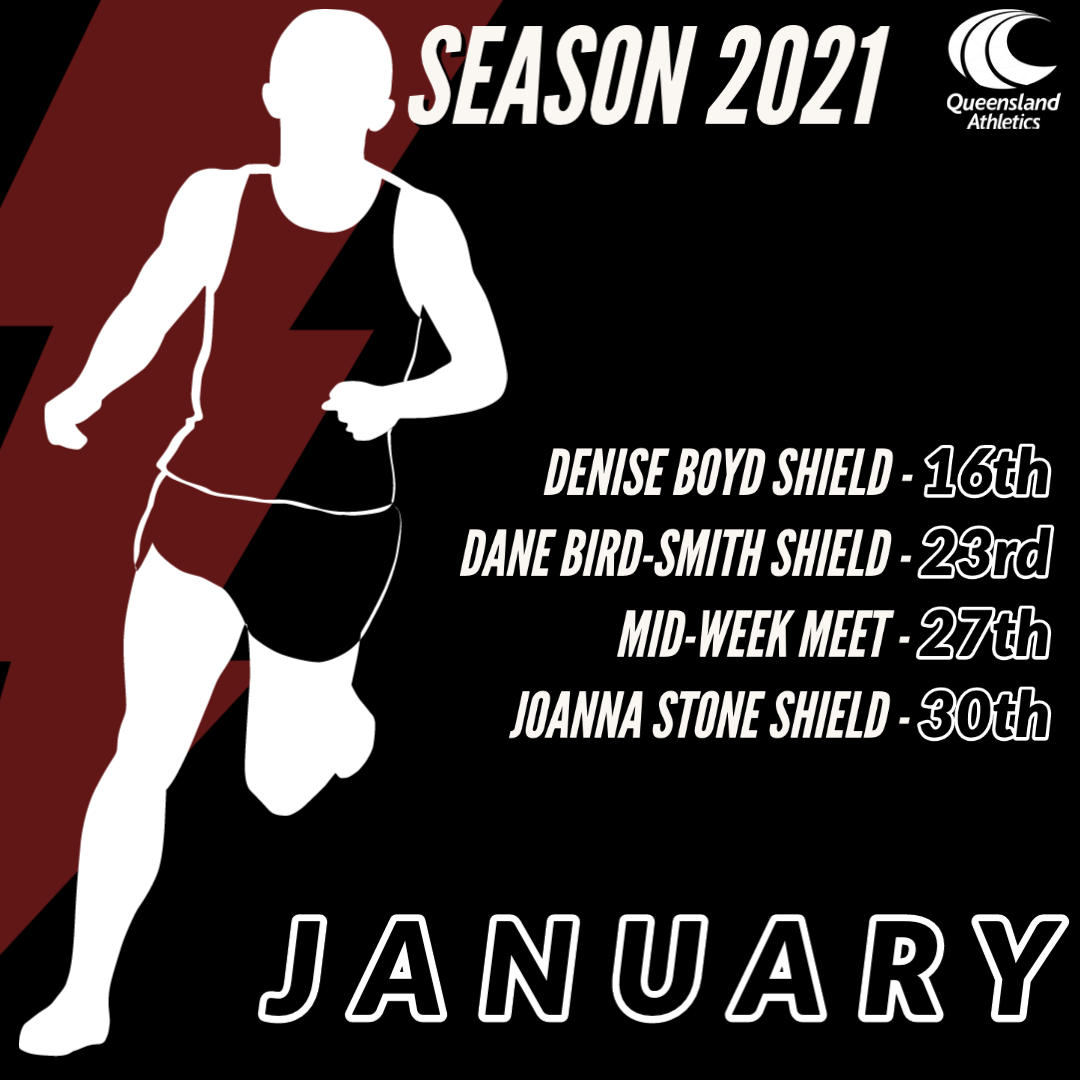 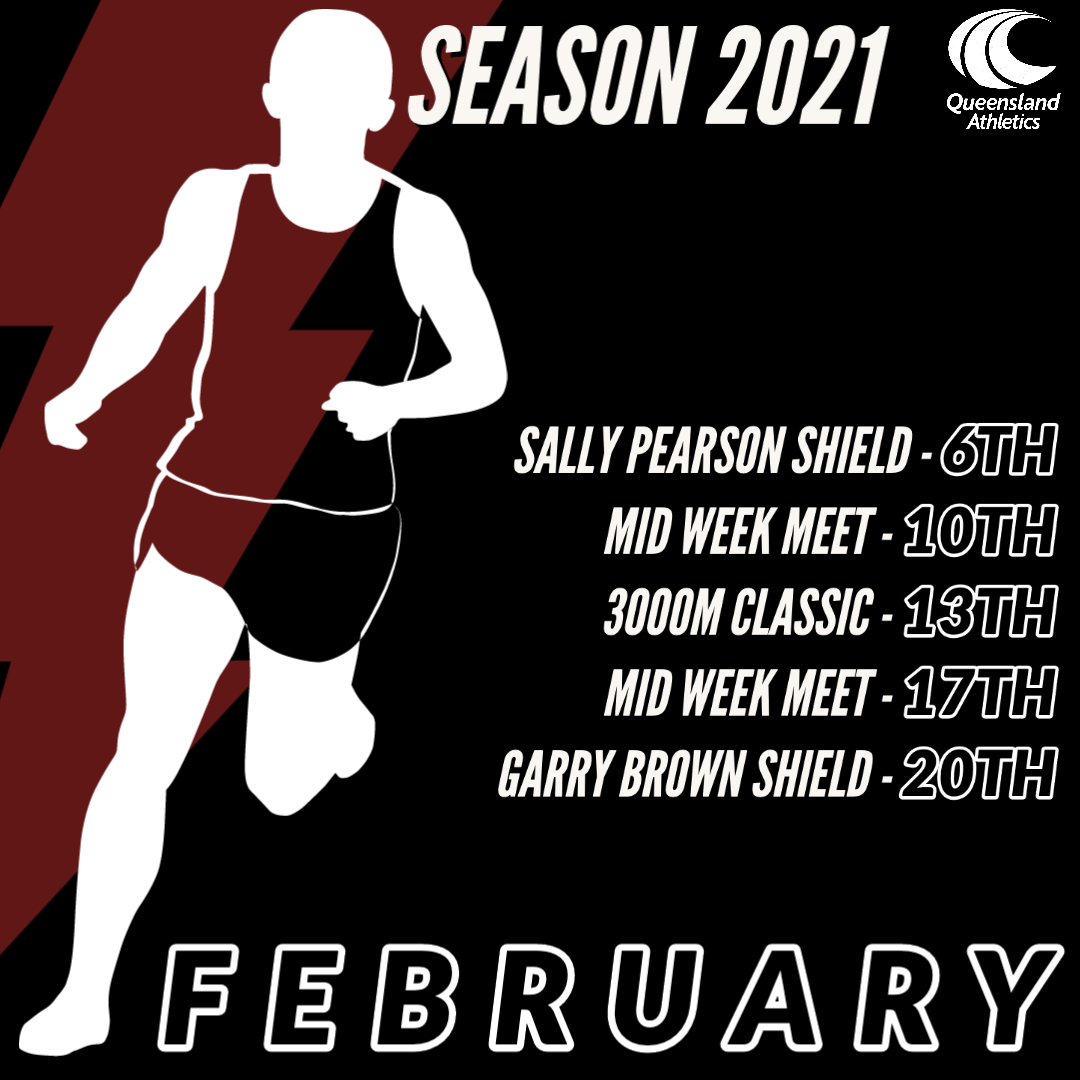 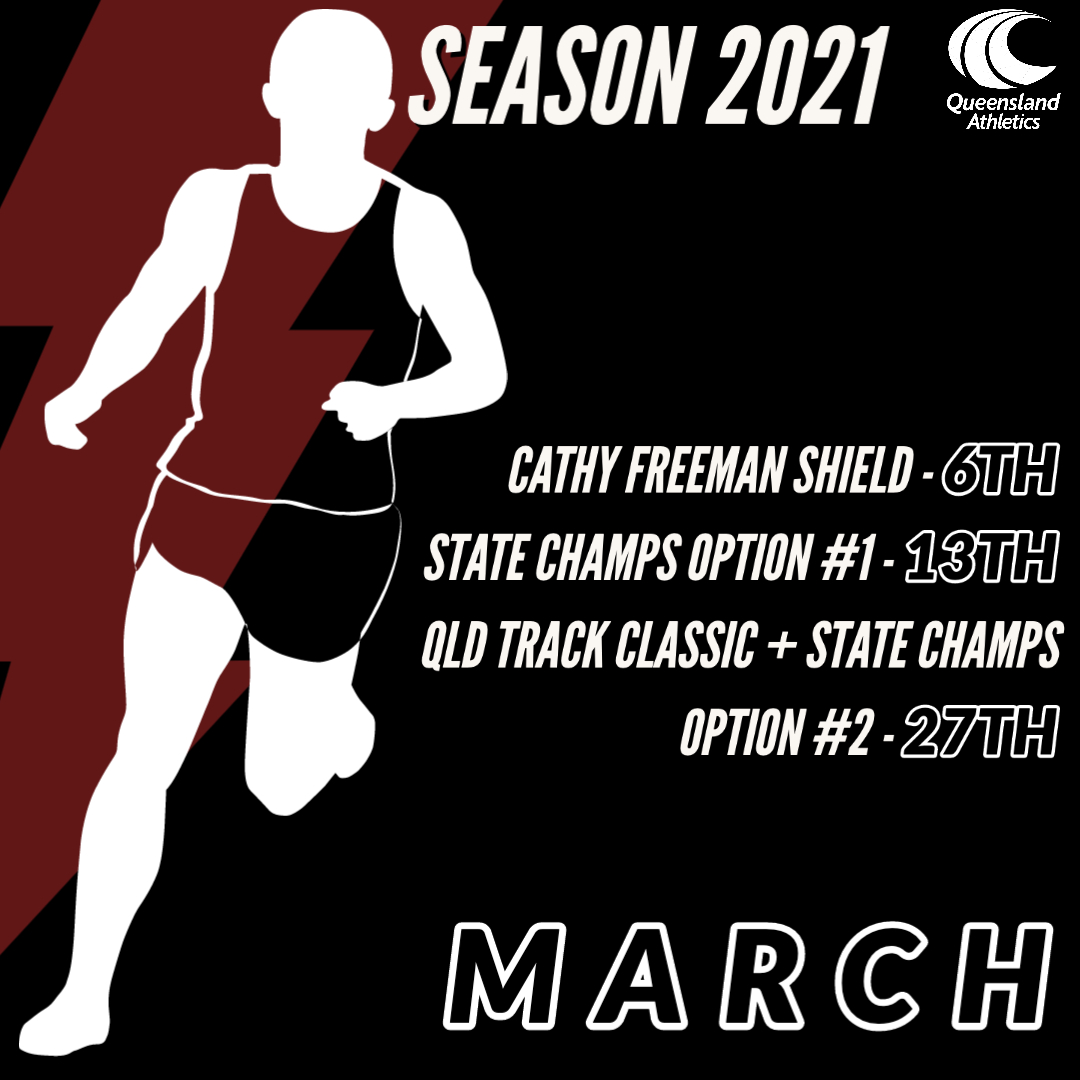 This time we sit down with Doha 4x400m representative Alex Beck. Fresh off a personal best during the 2020 domestic season, we discuss the feeling of breaking a long standing pb, his secret to consistency at the top level and his all time 4x400m relay teams.

This week we sat down with sprinter Ella Conolly.
Ella re-wrote her Pb's in a flourish of fast running late 2019 and early 2020 but came up against some injuries. We chat the path she's taking to get back on track during isolation as well as her journey representing Australia.

We chat isolation in Philadelphia, favourite races hes been in, advice on aspiring college athletes and much more. 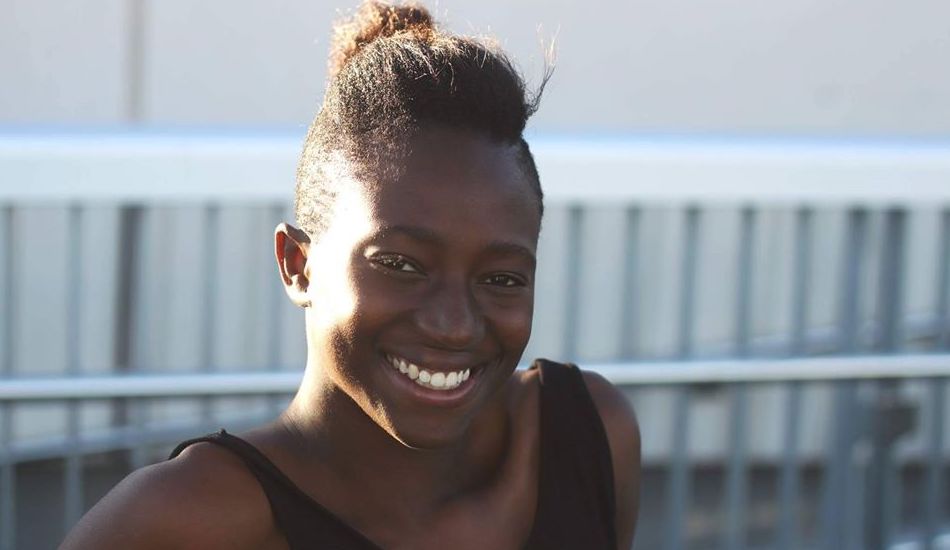 We catch up with Naa Anang to chat about the current world we live in, what keeps her busy during the day, a look back at her amazing 2019 season and much more. 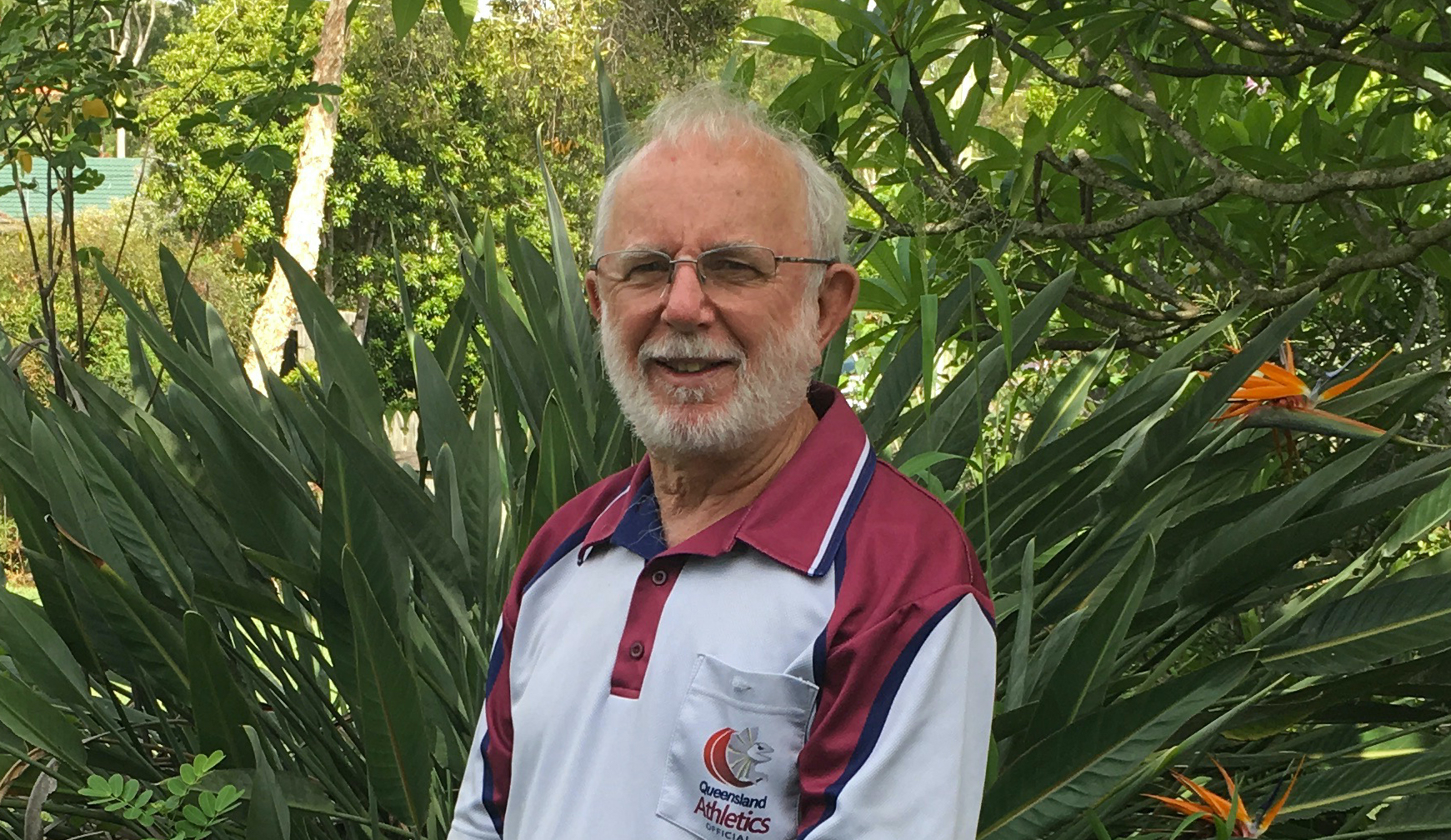 TWO quiet achievers from the southwest have been awarded the Medal of the Order of Australia for services to the community.

Retired Inala builder Barry Dobson, 77, was nominated by his sister Andrea Thompson after a lifetime spent volunteering as an athletics official.

While pursuing his own goals as a marathon runner, Mr Dobson has taken on volunteer roles such as track umpire, timekeeper, coach and club committee positions to help others pursue their sporting dreams.

Mr Dobson migrated to Brisbane, from Britain, with his wife Irene in 1963 and was soon organising athletics events at the migrant centre in Brisbane.

Since then he has been part of Olympic and Commonwealth Games events and lists being on the track as an official when Kathy Freeman won Gold at the 2000 Olympics as a highlight.

“I ran 17 marathons, the last four in under three hours, which is considered the yardstick,” he said.

*with thanks to Julie Sanderson from Quest Newspapers

As one of only ten Silver level meets on the World Athletics Continental Tour, and the first of the series, we aim to provide the best all round experience possible for those in attendance, joining the likes of ISTAF Berlin, recognised as the oldest annual one-day meeting (going since 1921)

Another exciting aspect of the Silver level permit is the significant prize money on offer to the athletes on the day. Participation in the Continental Tour, at the Silver level, grants athletes the opportunity to gain valuable “B” level points, as they strive towards the Tokyo 2020 Olympic Games.

Securing a Silver level event is a great result for Australian Athletics and next year our ambition is to go one step further and obtain a Continental Tours Gold Level. A Gold Level meet is the highest scoring one day competition outside the Diamond League and will include some Diamond League status event such as Discus and Triple Jump.

Nominations for the Queensland Track Classic are now open at: https://bit.ly/3aJCVvh

We look forward to seeing you all at the Qld Sports and Athletics Centre on March 20th for an amazing night of Track and Field action!

Previous Page 2 of 4 Next